If I were ranking feelings, inspiration would be super high on my list. I LOVE feeling inspired. Here are some random bits of stuff that made me feel inspired this week:

Ideally, whenever I feel inspired, I would drop whatever I’m doing in the moment and start writing or make a list or create a plan of action or whatever. I would immediately turn that feeling into DOING. In reality, the best I can usually manage is to make a mental note to revisit the object of my inspiration later, when I am less busy. This week I was firmly embedded in reality.

In the past, a week like this would have left me feeling drained, overly anxious, and feverishly reading articles about the possibility of time travel being invented in my lifetime on my iPhone late at night, while desperately trying to escape the clutches of insomnia (so many low-ranking feelings). But despite being busy and yes, missing some opportunities to channel my inspiration into creative outlets, I don’t feel frustrated or stifled. I feel free and calm and present.

So, I’ve been letting all of this rattle around in my brain as I tried to figure out what wisdom I might have that’s worth sharing with you. Because don’t we all want to know the secret to feeling more high-ranking feelings?

Psst, my secret is…I feel free and calm and present.

That’s it. That’s my secret.

I know you’re thinking there must be more to it because I’ve been thinking there must be more to it and we’re all taught there is more to it. We’re all taught to believe if we just make it over the next hurtle or beyond the next obstacle, then we’ll feel satisfied and we’ll finally have arrived wherever it is we’re supposed to have been going for so long. But somehow we never quite make it. The goal posts keep moving.

What if, instead, we all just decided to be where we are right now?

So why is it so hard to DO it?

Answer: We have been assimilated into a culture of busy-shaming.

I didn’t mention it earlier, but this week I also stumbled upon “Busy is the New Lazy,” by Chris Taylor, which is a perfect example of what I mean by the busy-shaming culture. The gist of the article is that “busy” has become a crutch. People who constantly say or think that they are busy are either trying to convince others (and maybe themselves) how important they are or making an excuse to get out of doing something else or shielding themselves from existential angst (deep). By contrast, those truly motivated go-getters among us, who, by the way, are not lazy, but busy, only in a good way, never say or think they’re busy because they refuse to play the victim card.

The moral of the story? If you want to be in with the cool kids, stop being so damn busy (and put away that resting bitch face, while you’re at it)!

I haven’t been tuned into the business world all that long, but even I am aware of the Olympic-swimming-pool-sized pool of actual and virtual ink spilled over the “Trap of Busyness.” It seems that everyone has something to say about what busyness really means; how to avoid falling into the busyness trap; or how to get beyond the fog of busyness.

We’re chided for filling our lives with tedious, superficial, boring tasks that make us unhappy. But, at the same time, we are bombarded by pressure to be more productive, more efficient, and to do more with less. Feeling busy seems like a perfectly rational response to such pressure.

Now, I do agree with Taylor that feeling busy is a choice and making ourselves busy can be a defense mechanism. But by equating “busy” with “lazy,” Taylor suggests that if you are busy, you should feel ashamed, which is supposed to motivate you to “snap out of it.” It’s the same thing that well-meaning rich people say to poor people “complaining” about being poor. It’s the same thing that well-meaning thin people say to fat people “complaining” about being fat.

The thing is, shaming people into changing never actually succeeds as a motivational tactic. And believing that it might is a definite sign of one’s privilege and mean girl (or guy) status.

Consider this post a public service announcement: I refuse to participate in this busy-shaming culture. I believe feeling busy is a choice and making ourselves busy can be a defense mechanism because I have chosen feeling busy over feeling free before and I have used busy as an excuse to avoid doing things I was afraid to do before. And I know (and in my finest hours, I even manage to remember) if you want to stop feeling busy, you need to stop being busy.

So since you already know, why not take the next step and let me help you by taking over some of those tasks that make you feel less free and calm and present? If you aren’t ready, don’t worry. I’ll be waiting here patiently for you to contact me.

Hey, maybe I managed to turn some of my feelings into DOINGs after all. 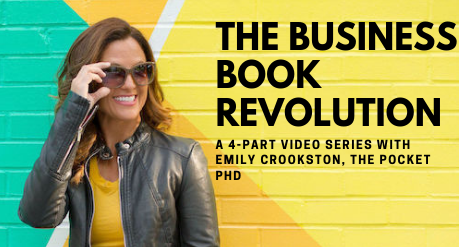 You say you want a revolution...well, do you?

Join me for this FREE 4-part video series. We'll gather virtually to stomp out the biggest obstacles to getting your book written, promoted, and published. You don't want to miss this!

You have Successfully Subscribed!